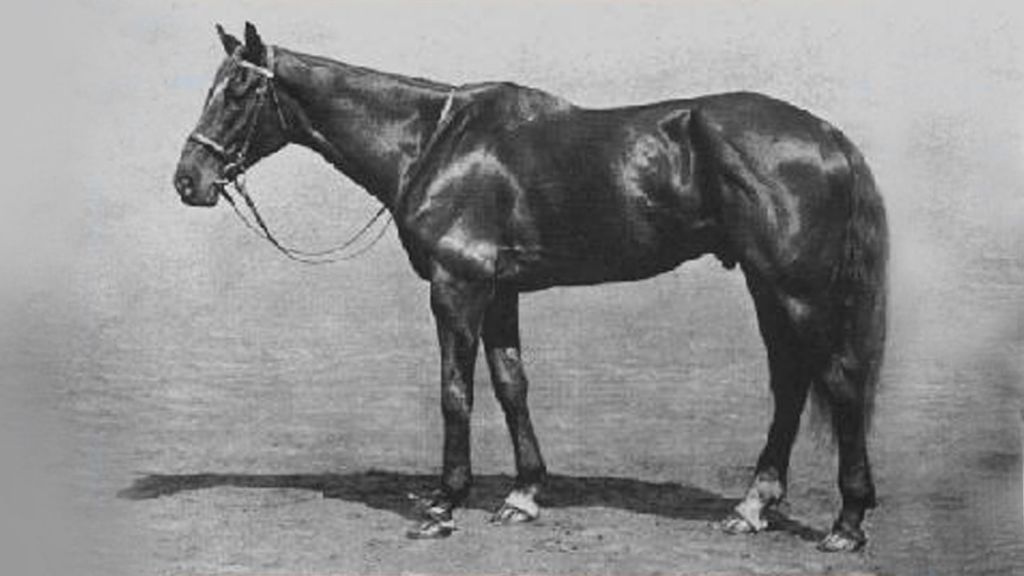 One of the most fascinating Stories is the story of Moifaa, who won the race in 1904. This was a New Zealand horse and was shipped here by the trainer Mr. Spencer Gollan. The ship had sailed nearly all the way to Liverpool when a storm whipped up in the Irish sea. When it was obvious that the ship was going to sink someone let him out of his box and let him roam free on the deck as he could not be put in a life boat. 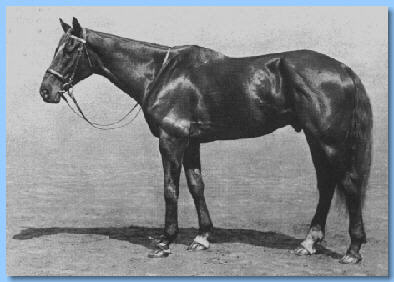 A local fishing boat when it called on a uninhabited island heard a whinny and found an exhausted horse near the coast and managed to get the horse on board, and took the horse home. A local reporter heard of the stories and Published it and when the trainer heard of the story he went to claim his horse, The horse was said to have swum 50 miles to safety and then went on to win the National!

The 1904 race did have a horse in the race that had been shipwrecked but it seems it was not the winner but another horse bound for Aintree. The story is told below: -

Moifaa was bred in New Zealand; he was a brown gelding by Natator out of Denbigh. He was a big strong horse with a plain head described by some judges as the head and shoulders of a camel. He stood 17 hands and proved to be a sound and good jumper. He was put into training in New Zealand and proceeded to win 9 of his 13 races including a three and a half mile chase in June 1901 under 13st and giving lumps of weight all round. After this race he was bought by a wealthy all round sportsman called Spencer Gollan from his former owners Alfred and Emily Ellingham. Gollan had been sending horses to England since the early 1890's, as he had been educated in England and his family having originally come from Scotland. He held an ambition to win The Grand National a race that his friend from school days the Prince of Wales had won in 1900. He decided to send Moifaa to England for a crack at the National and is here that the myth of the shipwreck comes in. Moifaa along with 3 other horses Toriki, Opea and Norton boarded a steamship for England, by sheer co-incidence another steamship left Melbourne bound for England it too carrying a couple of horses, Chesney and Kiora.

The first steamship arrived safely in England carrying Moifaa and co, however the second ship the S.S Thermopylae struck a reef oat Table Bay the Cape of Good Hope on the night of January 12th 1901. The crew abandoned ship and on reaching dry land the trainer of the two horses Chesney and Kiora informed the police and one brave officer swam out to the ship and managed to free Chesney but could not find Kiora in the now half submerged ship. It was feared that Kiora had been drowned but somehow the horse had broken free and had swum to Mouille Point where he landed on a shallow reef. 10 Hours later some locals found the horse alive but exhausted and he eventually continued his journey to England where he was to run in the 1904 National along with Moifaa. It seems that after the 1904 National a story leaked out to the press of a New Zealand horse having survived a shipwreck, naturally it was assumed it had been the winner and the story has stuck ever since. To be fair the story was originated in the American press and the myth grew out of that.

Once Moifaa had reached England he took a while to adjust to English conditions and in his first three races he was unplaced. He was entered for the 1904 Grand National and was allotted 10 st 7lbs; his trainer O.James had been a jockey riding Gollan's horses prior to turning trainer in 1900. Hickey had been born in Australia hence his association with Gollan, as Gollan had raced and ridden in New Zealand and Australia. The jockey Ben Ellis was due to ride Moifaa but we can only assume he picked up an injury and a journeyman jockey Arthur Burch was given his mound.

On the day of the race the fences were particularly bigger that usual but with Moifaa's huge frame and jumping ability this played into his hands. Amongst his rivals were the 1920 winner Ambush II ring in the Kings Colours along with the 16 year old MANIFESTO making his final appearance, amongst the fancied horses were Patlander, Detail and the winner in 1905 Kirkland. Moifaa started at 25/1.

As the race got underway Railoff was the first to fall at the first and the Favourite Ambush and Dearslayer want at the third amidst a huge groan from the crowd. Moifaa had been pulling Birch's arms out and when the leader Inquisitor went at the 5th Birch gave him his head and he went on crashing through fences and proceeding to lead all the way from there. At Becher's the second time Detail got within two length of him only to be brought down by the rider less Ambush. Moifaa continued on his way and jumped the last two fences perfectly to win by eight lengths from Kirkland with the Gunner a head away in third. The King who watched the race was so impressed with Moifaa that he arranged for his racing manager to buy the horse as a replacement for the aging Ambush. So in 1905 Moifaa was set to run in the King's colours, George Williamson was booked to ride the horse but the day before the race he was whist riding he was kicked in the ankle an he dismounted and was put out of action.

A telegram was sent to birch to see if he could ride the horse but unfortunately Birch was unable to get there in time and the mount went to Bill Dollery. Under a huge amount of money Moifaa started as favourite were he got as far a s Bechers the second time where he fell, the race going to Kirkland. After the race Moifaa went wrong in his wind and the King gave him to Colonel Brocklehurst who hunted him I the Leicestershire countryside. When the King died in 1910, Moifaa followed the gun carriage that carried the coffin though the streets of London, with the Kings boots reversed in the stirrups. What happened to Moifaa after is not certain. Not so lucky were Arthur Burch who two years after his most famous win broke his back in a fall at Gatwick in December 1906. He was confined to a wheelchair but died in 1911 at the early age of 36. James Hickey died in the same year aged 41 in a mental asylum. Spencer Gollan was more fortunate outliving both of them until January 1934 when he was knocked down and killed by a bus in London aged 73.

Story researched and written by Derek Gay. I would like to express my thanks to Derrick for this fine contribution to this section of the site. Derek is an enthusiast in the history of The Grand National and I hope he will be a regular contributor to this web site.